In our industry, she is loved and respected by everyone she works with, from clients who have been bringing shows to San Diego over the past 30 years, to neighboring businesses that she has coordinated with during major events, to Convention Center staff who she mentors on a daily basis.

This year's theme was "Change Makers Shaping the Future".  For anyone that knows DeeAnne, it's clear why she was recognized among the other industry icons. She truly embodies this theme as a woman who has made a life-long impact in Tourism and Hospitality. A native San Diegan, she brings passion, commitment and love of all things San Diego to her role as Director of Events at the San Diego Convention Center. 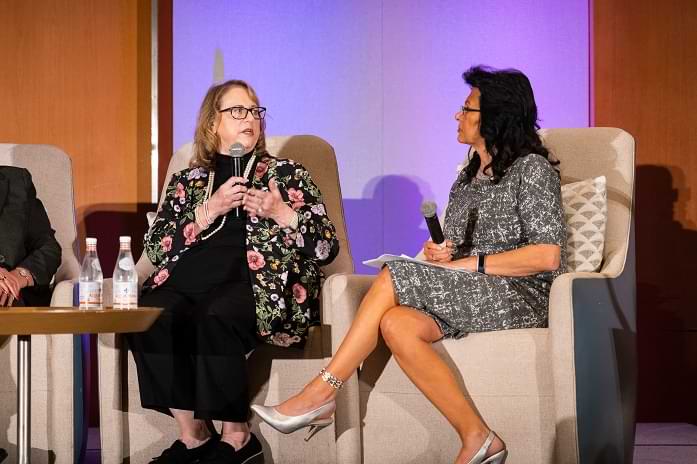 DeeAnne first came to the Convention Center as a client, organizing one of the first local consumer shows in the region on behalf of San Diego Home and Garden magazine. Downtown San Diego was a different place at that time, and she worked alongside business owners to change the reputation it once had: from a place people avoided, to a destination that visitors wanted to experience.

DeeAnne was hired to work for the San Diego Convention Center, a dream come true for her, in May of 1993 as an Event Coordinator and worked her way up to a Senior Event Manager.

When she was promoted to Director of Convention Services in 2006, DeeAnne's goal was to create a "partnership for success" in the role. Under her leadership, her team of Convention Services staff members became promotion partners for the destination, introducing meeting planners to off-site locations to enhance their events and building a stronger connection to the city. Many of the Convention Center's returning customers are people DeeAnne now considers life-long friends. She's built relationships with meeting planners across the nation. And they all have a special place in their hearts for our fine city because of their experiences that DeeAnne and her teams have helped create.

In March 2012, DeeAnne returned to the Event Services department to lead the team as the Director. She has been assigned to over 300 events, but she has had a hand in the planning of thousands more, including her proudest project, serving as the Lead Event Manager for the 1996 GOP National Convention. She's also been an integral staff member on Comic-Con International and some of the largest medical meetings in the world such as Neuroscience and the American Society of Hematology.

She knows every inch of the San Diego Convention Center and has seen almost every way to transform the venue into the most important space of a customer's year. It takes a team of experienced event managers to collaborate with our customers and organize 615,701 square feet of useable exhibit space, food and beverage, audio/visual, telecom connectivity into a success, and DeeAnne is at the helm of that team. Along with her key leadership of internal teams, she has built a solid partnership with our surrounding businesses, civic agencies and regional non-profits. These relationships are crucial to the success of the entire tourism industry.

Over the years, she has served on numerous boards for various tourism-related organizations, including the Cabrillo National Park and Balboa Park Marketing Committee. She's also volunteered for numerous local charities and philanthropic organizations, including Monarch School, Neighborhood House, and Hi-Tech High serving at-risk youth. She has taught and lectured on hospitality and tourism at USD and SDSU. When talking about mentoring the next generation of event managers, DeeAnne said this:

The event concluded with presentations of two awards. This year's Carol Wallace Lifetime Achievement Award, named after the San Diego Conventions Center's former President & CEO, was presented to Lesley Cohen, co-founder of Cohen Restaurant Group. The first W.I.T.H. Good Guy Award was presented to Robert A. Rauch, President and CEO of RAR Hospitality and former San Diego Convention Center board member, for his support of women in the industry.

Rita de la Fuente is the Director of Government & Community Affairs for the San Diego Convention Center. She has a broad background in stakeholder relations, community outreach and nonprofit advocacy. She’s known to give great advice for where to eat or play in San Diego’s neighborhoods.

Subscribe to our newsletter to stay updated with Convention Center news, events, job listings and more.